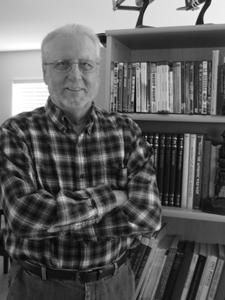 Patrick Andrews was born an Army Brat on January 14, 1936—his sister’s arrival just two years later. His father was a paratrooper in the 82nd Airborne Division during World War II. His mother was a good army officer’s wife, who, like several of her lady cousins, wrote short-stories and poems.

After the war, Patrick’s father transferred into the Army Reserves, and they moved to Wichita, Kansas. This is when Patrick caught the scribbling bug—to the point where he refused to do his school work. Patrick figured his school teachers had him during the day, and that was enough. His father punished him, of course, but it did no good. He once went three months without movies.

When Patrick got a nice job on the Wichita Eagle newspaper, he was ecstatic. As a copy boy, he was issued a Wichita Police Department Pass. Sometimes, the crime reporter was at the site of a murder, and Patrick would be sent over with his Police Pass to pick up the crime reporter’s scribblings. Patrick would then rush back, and turn the information over to a night editor who would print up the crime.

After a couple of years, Patrick got a yen to be a paratrooper. He enlisted in the Army and took basic training in Camp Chaffee, Arkansas, soon after being transferred to the 82nd Airborne Division in Fort Bragg. The cadre that trained him consisted of big, tough guys, who gave him hell. But Patrick got by and earned his parachutist badge. His career with the 82nd was rewarding—being promoted to sergeant and tasked with training cadets in West Point before retiring.

When Patrick read James Jones’ From Here to Eternity, he appreciated the pride and struggling of soldiers. Soon after, he moved to San Diego, California and began writing and mailing manuscripts while working at a union typesetting company. He married and had one child, named William Patrick, who grew up to become a paratrooper.

One pivotal night, Patrick was with a couple of his writing buddies, drinking scotch whiskey and playing at writing bestsellers. The next day, they decided their Sixgun Samurai series was worthy of publishing and drove up to Pinnacle Books in Los Angeles, where they walked out with a book deal. Patrick and his friends went on to write the series’ twelve novels—which were also printed in the U.K. by Star Books, the paperback division of W.H. Allen & Co.

From that time on, Patrick and his friends started selling their personal books. Patrick’s writings were western, men’s adventure, and military-related. Years passed, and he had 24 e-books with Piccadilly Publishing in the U.K.

Eventually, Patrick contacted James Reasoner, who referred him to Wolfpack Publishing and Rough Edges Press. Now, all six of Patrick’s Wichita Detective books will live to see the light of day and find refuge on a cozy shelf in Ocean Hills, California where Patrick and his beloved wife, Julie, live.