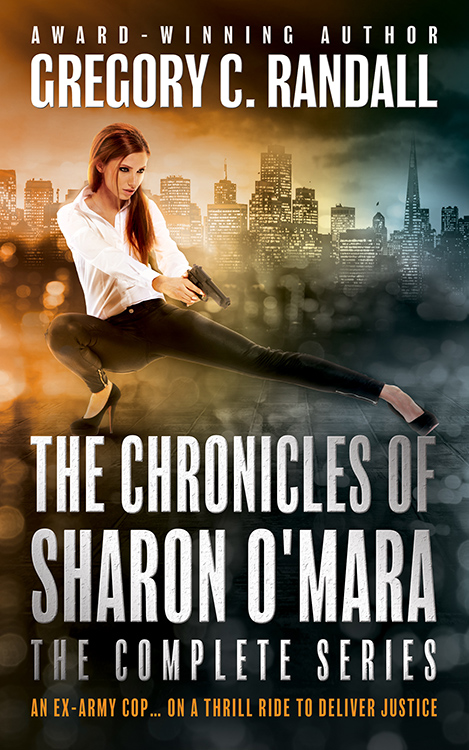 The Chronicles of Sharon O’Mara, The Complete Series

In Land Swap for Death, Sharon has just returned from Iraq and the Army’s military police. Assigned to settle a life insurance claim, she struggles with the insane thought that the man’s death was no accident—but rather, a brutal murder.

Book two, Containers for Death, trails a wet and raucous ride from Mexico’s Baja beaches to San Francisco’s darkest alleys when what starts as a luxurious vacation getaway for Sharon turns terribly wrong after she finds a shipping container filled with knockoff luxury handbags and death.

Toulouse for Death follows a Toulouse Lautrec painting being stolen by Nazis, a dying friend’s wish, and an old evil that returns to the twenty first century… Will Sharon and her friends survive a night of unmitigated terror?

In 12th Man for Death, Sharon is hired for a simple job—find out who killed the great America’s Cup skipper and technical genius, Catherine Voss.

A man is found dead on second base in the San Francisco Giants’ ballpark in book five, Diamonds for Death. How he got there, no one knows. But one thing is certain—Sharon must go to Cuba to find out.

During Limerick for Death, Sharon heads to Ireland to help her friend with his newfound inheritance—an old and dilapidated baronial estate that overlooks the Celtic Sea and holds untold secrets. But the insatiable greed of an evil developer, smugglers with a secret tunnel, and local Cork County history stand in her way.